This resulted in a preliminary list for The Word 2016:

Unfortunately, with mixing sayings from the current contributions in the BibleStudio and from 2009, I missed one point: the date assignments shown in the BibleStudio while people assigned cross-references. To restore these in the preliminary list, I took the list of first sayings and dates from BibleStudio

and put these dates into the preliminary list. Interestingly, this showed that 11 first sayings in the BibleStudio have been assigned to each other, but to no other cross-reference:

Experts, interested in how I mixed the two .csv lists? Programming a clever C#/Java/Python/Javascript/PHP/whatever application? No - save the effort... Typically I perform such operations interactively in the Emacs editor. I open both lists side by side, so that I can easily navigate via keyboard from one list to the other (Ctrl-x "o"). Then I record a macro (Ctrl-x "("), roughly: copy the date in one list to the clipboard (Emacs: kill ring; Alt-w), then start an incremental search for the Bible reference (Ctrl-s Ctrl-w some times, ENTER), then navigate to the other list, jump to the beginning of the list (Esc "<"), repeat the search (Ctrl-s Ctrl-s), stay at the found line (ENTER), navigate to the end of the line (Ctrl-e), add a semicolon separator and insert the copied date (Ctrl-y). Navigate back to the first list (Ctrl-x "o"), one line down (Ctrl-a Ctrl-n Ctrl-a), and finish the macro (Ctrl-x ")"). Then repeat as long as appropriate (Ctrl-u "0" Ctrl-x "e"). Now I already have the information combined in one list, and so goes it on.

One detail: when the repeated search does not find the Bible reference, macro execution stops. This is not comfortable. To avoid this interruption, I first copied the entire second list at the end of the first one.

The Word 2016 With Dates Goes Server

To put this to the server, another Emacs macro converts the list to an SQL statement like:

With some more SQL, the list of sayings for 2016 are available in the server database. A command already implemented on the server extracts the Bible text of the verses from the Schlachter 2000 and English Standard Version, creating a raw version of the sayings.

To cross-check that all sayings are available in various Bibles, I thenformat them for the Schlachter 2000 and the English Standard Version. This works comfortably in our internally available browser application: 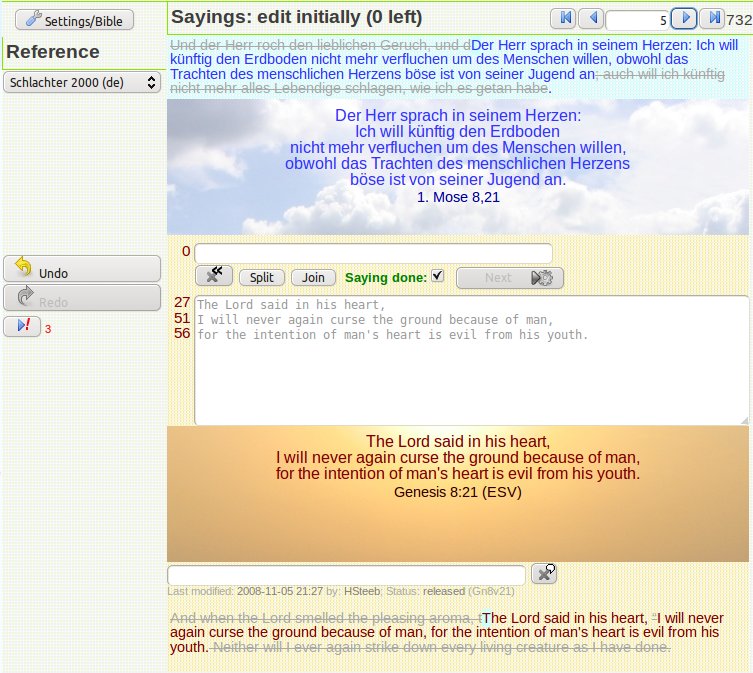 This is the same application all the translation editors use to prepare the formatted sayings in all Bible editions supported. On top, it shows the formatted saying in the reference Bibles Schlachter 2000, at the bottom it shows the saying in the Bible edition currently edited. As soon as the English Standard Version saying is available, it can also be used as reference.

This is enough for today. The next step is to check the Bible references for some important holidays. Then I would create, check and publish the .twd files from the formatted sayings.